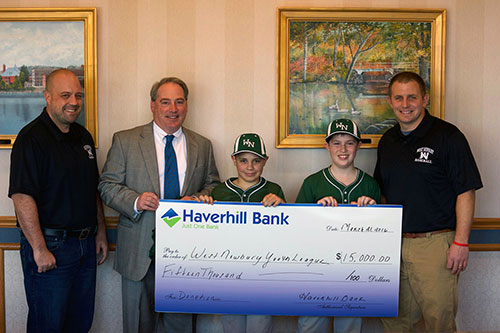 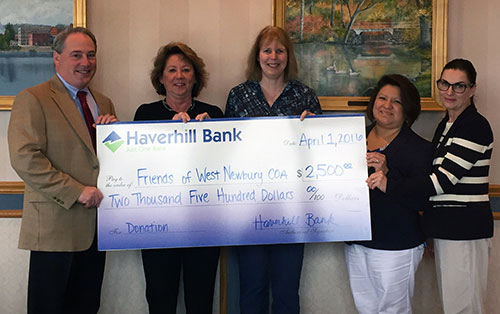 HAVERHILL, Mass. (April 7, 2016) –– Replacement batting cages and dugouts are coming to the West Newbury Youth League and supporters of the town’s Council on Aging will receive a boost as a result of two Haverhill Bank contributions totaling $17,500.

The West Newbury Youth League was recently given $15,000 by the bank to back their continuing efforts. The league supports youth athletics in the town of West Newbury in the form of basketball, baseball, softball and soccer programs.

“Haverhill Bank supports the mission of the West Newbury Youth League, which includes giving every athlete an opportunity to participate regardless of financial constraints or other situations,” said Haverhill Bank President and CEO Thomas L. Mortimer. He added he is looking forward to opening day on Sunday April 24. Another $2,500 was donated by Haverhill Bank to the Friends of the West Newbury Council on Aging. “The amount will help get this worthwhile organization off and running,” Mortimer said.

“The best way to raise money for vital programs is to make sure the word gets out in the first place,” Mortimer said, explaining the bank’s support. He cited, as an example, the upfront expenses associated with the forthcoming “Party with Friends” event at West Newbury’s Annex Building.